Umm… how to start this…
Okay, I must admit that I feel pretty bad after reading Xiaxue latest entry ( was directed there… ).
I can somehow understand how she feels now. 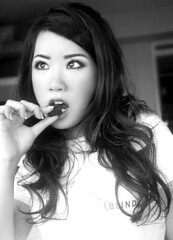 I’m not trying to sound like a nice guy, nor to stir up anything again,creating hits…
And definitely not trying to win votes from her camp ( ha, check out the comment column in my previous post…)
Just wanna share my thoughts. So read it objectively.
Here we go.

I’m NOT good in my English… C5 for my O’s… ha…
I think I speak better (mandarin, of course), not writing (in English).
I guess I wasn’t able to fully relate what I mean by writing that particular post.
Or have I might have misread her post.

As for her case, it’s the other way round?
Better in writing than speaking?
I started to realize this when comment started pouring in after I publish the post. There are some that actually pointed out this point. True enough, I’m right in front of the camera almost everyday so kinda got used to it. As for her, it’s a totally different story.

Xiaxue mentioned that I did not approve her comment… I try very hard to recall (really, tried very hard…)
I normally approve all comments, even negative ones… unless it’s REALLY bad…
Then I suddenly recall something. *Spam mail*
I got in there and I found it sitting comfortably there. So drama huh? 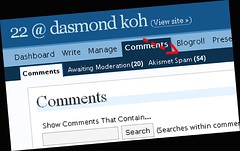 This is what she wrote:

Hey Zhen Rong,
It’s XX here – just got directed to your site via a reader. Didn’t know you were a fellow blogger!
Anyway, I just wanted to clarify any sorts of animosity that might have been arisen by my blog entry.
You seem to take the comments I wrote as me taking offense regarding the questions I was asked, but I wasn’t offended, or even the least bit angry.
I was merely stating the facts as to what was asked that day, and I understand perfectly that you and Yifeng’s job is to probe for answers. I knew that when I went on the show it wasn’t going to be easy, and I was the one who chose to go on it anyway.
I like you and Yifeng very much and part of the reason why I went on the show is because I knew you two were reasonable hosts and made everything seem more fun. I’m not sucking up to you, this is what I really feel.
As for people being rude to me, I didn’t wish to say names, but obviously that would have to be Mr Cai accusing me of writing fake content for publicity. It IS rude of him, and anyone will be offended. I wasn’t talking about you or Yifeng.
Lastly, I apologize for spelling your name wrongly!! I’ve always known you as Xu Zhen Rong, and although you never knew this, you have always been my favourite DJ back in 1996 when I was 12 and you brightened my nights with Xian (xuan?) Ge Ji Yi.

*blush* YOU EVEN READ MY LETTER BEFORE!

There! You reduced me to a little girl again! I can’t believe my favourite ex-dj blogged about me.

My apology for the misunderstanding… 🙂

I’m not angry at all about the E and not A in my name, maybe it’s the way I phrase it? 7 out of 10 person would have got it wrong… I merely wanted to point it out to everybody.

We recorded the show, then you blog, then I blog…
I thought being who you are, label as ‘frank’ and ‘straight-forward’, you should be able to take it with a breeze and not ‘rolled eyes, raised eyebrow’ like what you mentioned in your post. But guess I failed to see a point…
Only until the episode was aired, then I realized you’re being ‘attacked’ in a certain way. Under such situation, maybe it’s unfair to expect ya to live up to my expectation. We could have been more sensitive towards how you would feel then…

Just be who you are and blog the way you want. I know your supporters like you simply because of who you are. 🙂

Leave a Reply to =) Cancel reply