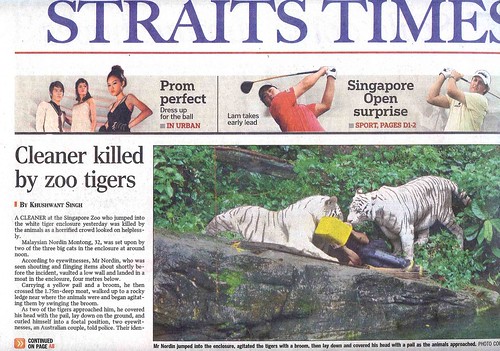 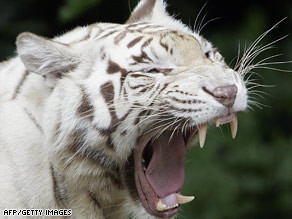 SINGAPORE (AP) — A zoo in Singapore says three white Bengal tigers have mauled a zoo cleaner to death after the man jumped into a moat surrounding their enclosure.
Biswajit Guha, the Singapore Zoo’s assistant director, says the tigers pounced on Nordin bin Mondong, a 32-year-old Malaysian.

Guha says fellow zoo workers managed to distract the tigers and pull Nordin away, but he died on the way to a hospital.

He said in a statement Thursday a Malaysian contract worker jumped into the moat at the white tiger exhibit and was attacked by three white tigers. He said “the worker tragically succumbed to his wounds.”

He said the zoo has temporarily closed the tiger exhibit and police are investigating the incident.