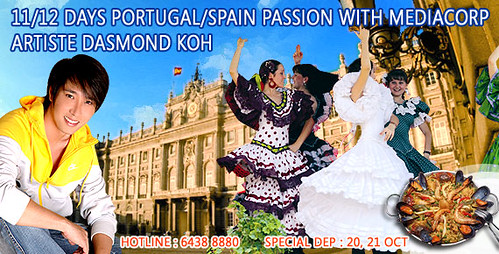 DAY 1 SINGAPORE – LISBON (Meals on Board)
Assemble at Singapore Changi Airport for your flight to Lisbon.

DAY 2 LISBON (Breakfast/Lunch/Dinner)
Upon arrival, proceed on a city tour of Lisbon, the capital of Portugal and visit Jeronimos Monastery, the city’s finest sight constructed in 1496. It boasts many magnificent Manueline-style buildings. See also Rossio Square, Discovery Monument and Belem Tower, which sits obligingly in the river as one of Portugal’s tourist icons.

DAY 3 LISBON – FATIMA – CACERES (Breakfast/Dinner)
After breakfast, you will depart Lisbon for Fatima to see the Shrine of Fatima, where apparitions of Lady Mary were reported during World War I. Continue your journey to the medieval town of Caceres, a 2,000-year-old city with traces of Roman, Arabic and Christian influences. It has been declared a UNESCO World Heritage Site because it is considered one of the three most well-conserved monumental collections in Europe.

DAY 4 CARCERES – MADRID (Breakfast/Lunch)
The tour continues to Madrid, the capital of Spain. Madrid happens to be Europe’s highest capital city at 2,000 feet above sea level. It has a wealth of palaces, castles and museums, as well as other unique buildings. Your guided tour will bring you to the old and new sections of Madrid like Plaza Mayor, Cibeles Fountain and Palacio Real in which plush decorations, furnishings and frescoes will fascinate you.

DAY 5 MADRID (Breakfast)
Today, you will spend your time at leisure to explore this city. You may wish to join an optional tour to visit Segovia where you can find the 2,000-year-old Roman Aqueduct and taste local traditional cuisine, the roast suckling pig.

DAY 6 MADRID – TOLEDO – SEVILLE (Breakfast/Lunch)
From Madrid, visit the amazing Toledo, the old capital city of Spain. The entire city is declared as a national monument and is also listed as a World Heritage Site. The walking tour of Toledo will include a visit to Santa Tome to view the renowned masterpiece by El Greco, “The Burial of the Count of Orgaz”. Strolling through the old city, you will view Plaza del Ayuntamiento and Town Hall Plaza where you can see the old buildings of Government offices and the spectacular Gothic structure, the Cathedral.

DAY 7 SEVILLE – GRANADA (Breakfast/Tapas Dinner)
Start your city tour with the stop at Plaza De Espana with its 58 benches around the square representing the different provinces of Spain. After that, you will visit the Bull Ring of Seville and also walk past the lavish Seville Cathedral where you can find the tomb of Christopher of Columbus. Tonight at Granada, you may attend a flamenco performance at your own expense.

DAY 8 GRANADA – ALICANTE (Breakfast/Dinner)
Granada , capital of Spain’s last Moorish kingdom, lies at the foot of the Sierra Nevada Mountains in the Autonomous Region of Andalusia. The city served as the Moorish capital of Spain until liberation in 1492. Your tour of Granada includes visiting the beautiful Alhambra and the adjoining Generalife Gardens. The palace is an Arabian fantasy of brilliant mosaics and tiles, and is one of the greatest accomplishments of Islamic art and architecture. The Alhambra is simply breathtaking. You will also see the dazzling fountains set in the Generalife Gardens. Alicante has wide boulevards, long white sandy beaches, a waterfront and Castillo de Santa Barbara, a 16th-century fortress that dominates the skyline. Alicante is the capital of Costa Blanca and is often associated with fun and relaxation.

DAY 9 ALICANTE – VALENCIA – BARCELONA (Breakfast/Seafood Paella Lunch)
From Alicante,travel to the 3rd largest city of Spain, Valencia. View its famous landmarks such as Plaza Del Ayuntamiento (The Town Hall), Plaza de Toros (Bullring)and Estacion Del Norte (North Train Station).Be amazed by the sight of citrus plantations as you travel in and out of the city. Continue to Barcelona.

DAY 10 BARCELONA (Breakfast/Lunch/Farewell Dinner)
Barcelona , the 2nd largest city in Spain in both size and population, has a pleasant Mediterranean climate and stands on a plain that slopes gently down from Sierra de Collserola to the sea. Begin your tour with a visit to the city’s spectacular icon, Sagrada Familia (Basilica of the Holy Family), a large Roman Catholic church which is a grand unfinished project by Catalan architect, Antoni Gaudí. Next, view Gaudi’s Casa Mila, Casa Batlo and Parc Guell,a famous park that display Gaudi’s works of extraordinary imagination. In the afternoon, explore La Ramblas and Plaza de Catalunya, Spain ’s most famous streets that are dotted with cafes, restaurants and kiosks as well as bustling with performing artists and people .

DAY 11 BARCELONA – SINGAPORE (Breakfast/Meals on Board)
If time permits, you can do some last-minute shopping before you transfer to the airport for your flight home.